In this 20th year collaborating with the University of Nottingham’s Mixed Reality Lab (MRL), we relish the opportunity to look back and celebrate some of the works we’ve made together.

Can You See Me Now? (2001) is the second collaboration made with the Mixed Reality Lab at the University of Nottingham, following 1999’s Desert Rain.

Artist Matt Adams shares his first glimpse of what the future could hold for mobile devices:

“Around the year 2000, I went to an event at the Royal College of Art and during that, someone said ‘in the future, there’s going to be a thing called 3G and when it comes, phones are will be connected to the internet’ and I can remember vividly sitting in that room going, ‘you what?!’ You know, the idea that a phone would have the internet on it, like, no one can even understand what that means because in those days the screen was black and white, 2cm by 2cm…What would you even do with that? That’s completely bonkers, so we were really excited to explore that and understand what exactly that would mean.”

“The very first version of Can You See Me Now?, which we have documentation of in Sheffield, they [the street runners] weren’t even figures walking around in space, they were little squares sliding around on a mat, that’s all it was, it’s as crude as you can imagine. It was a year later before we could do anything 3D online, the broadband just hadn’t come in… there just wasn’t the speed to do it. It was all done for dial up modems and we set up our own wifi networks as well so we bought these wifi transmitters that were sort of half a meter tubes and then we would climb up and bolt them onto a multi story car park and then run the cable to power them.”

Working with Mixed Reality Lab, we were looking to identify the wider repercussions of this communication infrastructure. When games, the internet and mobile phones converge what new possibilities arise?

Can You See Me Now? was winner of the Golden Nica Ars Electronica Award in 2003 and was nominated for a BAFTA in Interactive Arts in 2001. 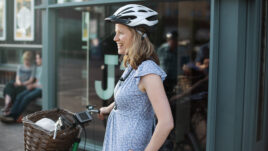 Twitter
Facebook
Instagram
Vimeo
YouTube
Flickr
Cancel
https://www.blasttheory.co.uk/wp-content/uploads/2013/07/press_CYSMN_3-1024x768.jpg
In this 20th year collaborating with the University of Nottingham’s Mixed Reality Lab (MRL), we relish the opportunity to look back and celebrate some of the works we’ve made together.
20 years with MRL, Part Two: Can You See Me Now?