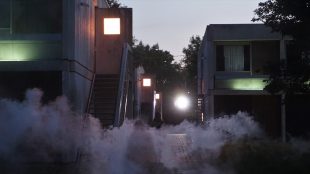 The fourth 2097 film is now up and sees the imaginary city of Aarhull get destroyed as molecular harvesters move in. Looking at the future of cities, ‘Moving Out’ explores how, and where, we might live in the future.

The films are being shown throughout October at city screenings open to everyone. If you’re not in Hull watch the films online or on the free 2097 app. Search ‘2097’ in your app store to download.

Spanning two cities – Hull and Aarhus – 2097: We Made Ourselves Over combines five short sci-fi films, interactive experiences and face to face encounters to make 2097 our most ambitious project to date.

The Aarhus branch of the project, taking you on a journey to a secret location in a private electric vehicle, will launch on 30 October. Get your tickets now.