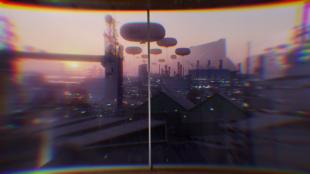 The future literally knocks on the door in 2097: We Made Ourselves Over. It insists on being let in and examined in all its aspects and implications.” – Kunsten-nu

Our biggest and most ambitious work to date, 2097: We Made Ourselves Over was inspired by the citizens of two cities and sought to build on the unnerving and exhilarating idea that we all have the power to act and influence the future.

We were overwhelmed by the incredible response to 2097: Live in Aarhus, with the first wave of tickets selling in days and the second and third ticket releases also selling out almost immediately.

2097: Live in Aarhus took participants on a night time journey to a secret Aarhus location 80 years into the future – combining theatre, audio and installation to create an unforgettable experience.

Read the full story of 2097: We Made Ourselves Over.

2097: We Made Ourselves Over is a new work by Blast Theory, co-commissioned by Hull UK City of Culture 2017 and Aarhus European Capital of Culture 2017 in association with KCOM.