The UK’s first ever interactive feature film, broadcast live online and at cinemas around Europe.  SJ breaks into an army base to bury the ashes of her great-grandfather, a conscientious objector during World War One. Inside, surrounded by soldiers and the ghosts of past wars, she finds a place where her certainty begins to… END_OF_DOCUMENT_TOKEN_TO_BE_REPLACED

The Process 2097: We Made Ourselves Over explores the belief that everyone has the power to act and influence the future – uncovering the unnerving and exhilarating idea that anything is possible. Inspired by the respective histories of communities in Aarhus and Hull,  Blast Theory worked with dozens of residents, from year 10 students and… END_OF_DOCUMENT_TOKEN_TO_BE_REPLACED 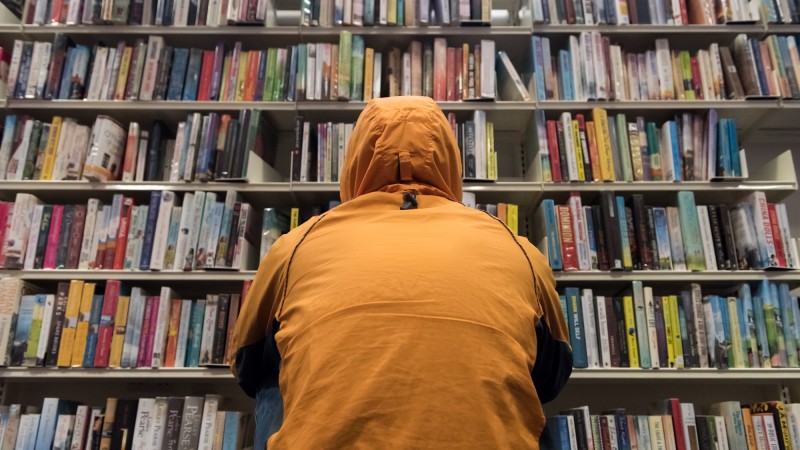 Blast Theory, acclaimed author Tony White and 30 young people aged between 14 – 19, worked together in the West Midlands at Cannock, Southwater and St John’s libraries, to re-imagine libraries, story telling and their place in the world. It culminated in a 9-hour takeover of the three libraries on the 29th of October 2016. On… END_OF_DOCUMENT_TOKEN_TO_BE_REPLACED

Over the course of a single sunset, as the shadows lengthen, My One Demand takes a slice through Toronto. Starting with a baby in the arms of a woman walking out of Toronto General Hospital, we follow seven people – one at a time – as they move through the city as darkness falls. Each… END_OF_DOCUMENT_TOKEN_TO_BE_REPLACED 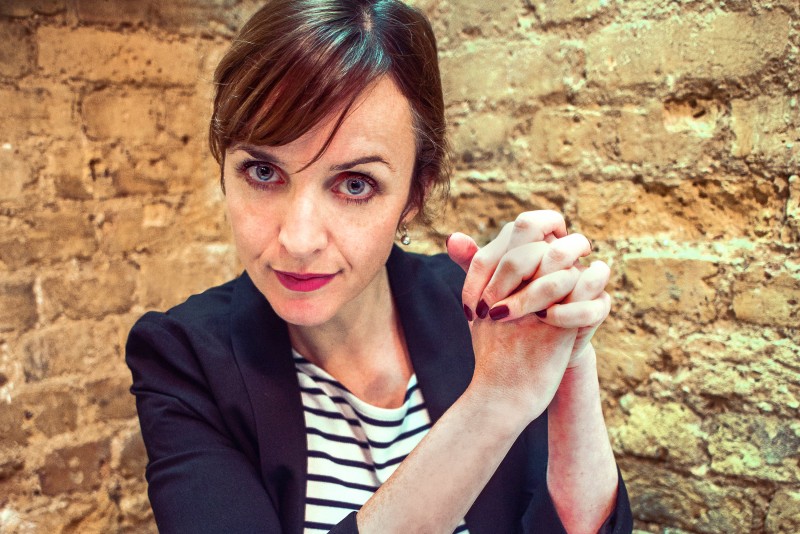 Over the next week you have calls with Karen once or twice a day. Working from home as a freelancer, it soon becomes clear that Karen is slightly chaotic with few boundaries between her personal and professional lives. She contacts you late at night from her bedroom. She overshares and in return is very nosy… END_OF_DOCUMENT_TOKEN_TO_BE_REPLACED 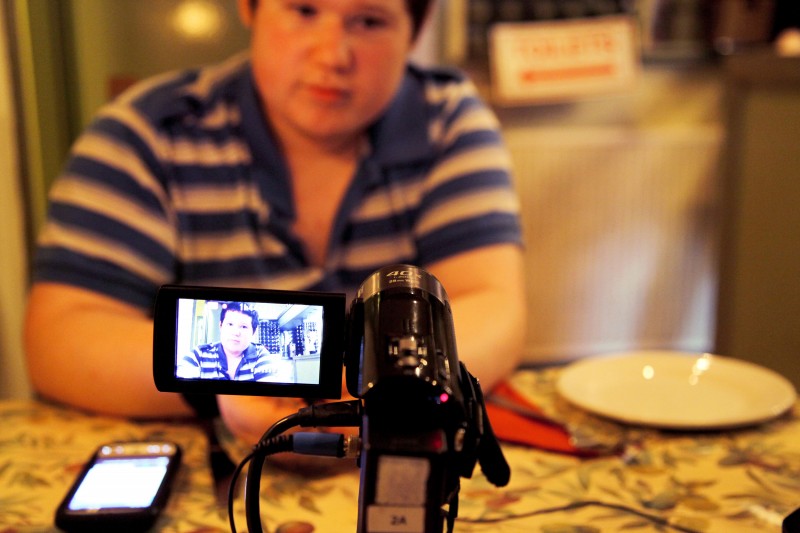 Later a crane lifts the boat onto a lorry at the Nagoya Port and it is driven into the city centre at midnight. Crowds gather to watch along the route and as the lorry arrives at the park, the boats’ final resting place. People bring food and drink, make videos, photos, hang out, worry and… END_OF_DOCUMENT_TOKEN_TO_BE_REPLACED 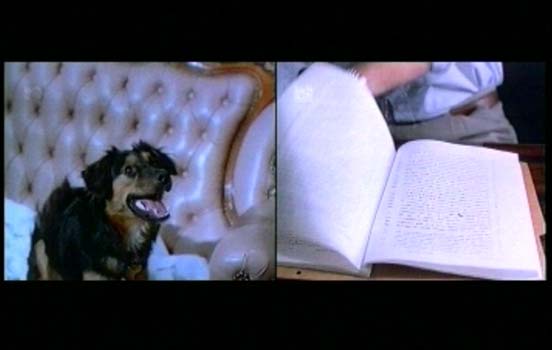 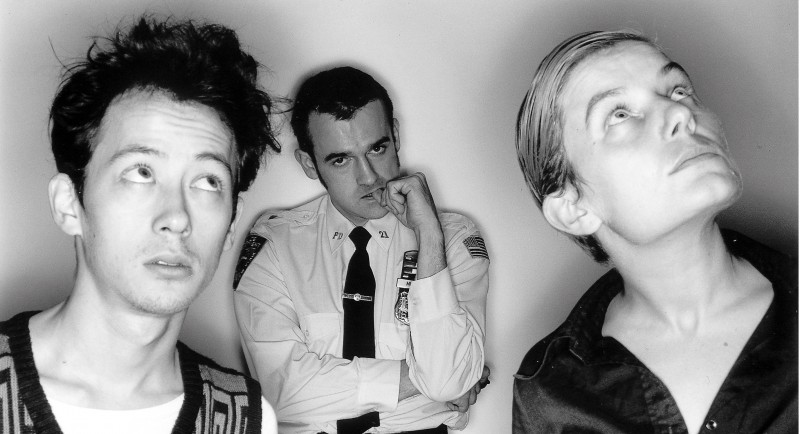 As Something American develops, the cop sheds his layers of pretence. He opens up, breaks down and falls away. As he does so other versions of America come through; sometimes in tiny moments, at others in a flurry of activity and pumping music. Three performers talk about boxing and Rock’n’Roll and Remote Viewing. Then the… END_OF_DOCUMENT_TOKEN_TO_BE_REPLACED 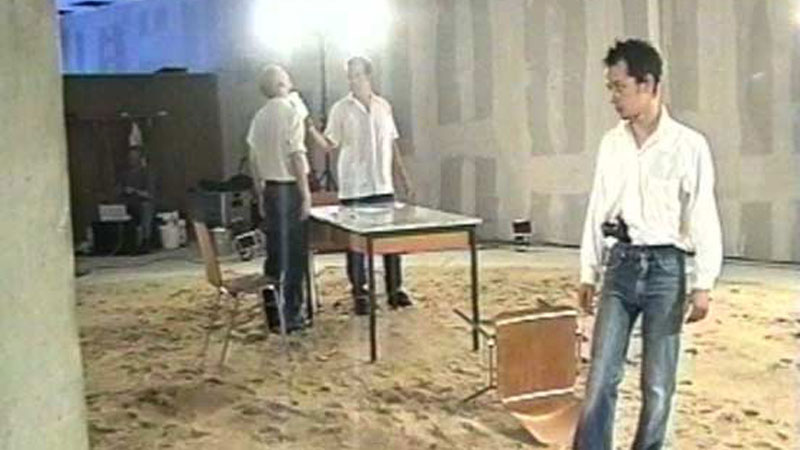 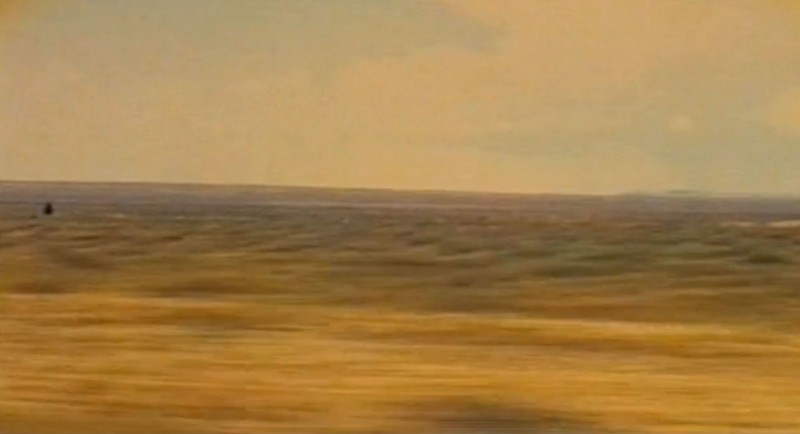 In 1998 Blast Theory launched a lottery in which the winners had the chance to be kidnapped. Ten finalists around England and Wales were chosen at random and put under surveillance. Two winners were then snatched in broad daylight and taken to a secret location where they were held for 48 hours. During the run… END_OF_DOCUMENT_TOKEN_TO_BE_REPLACED 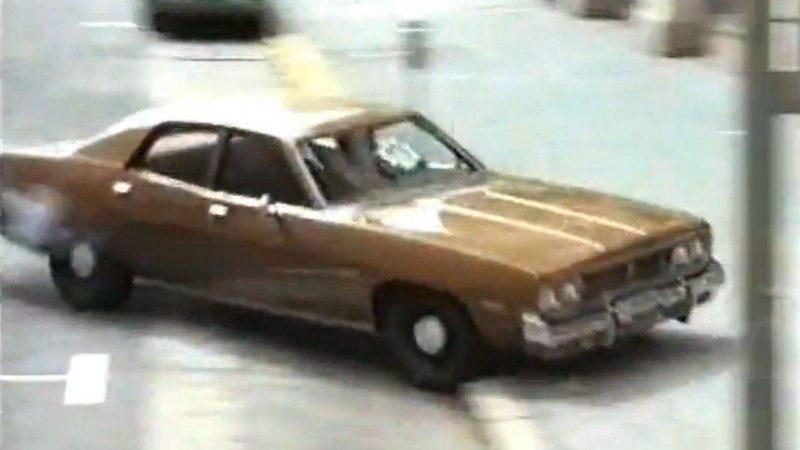 Stripped of their narrative drive these fragments take on a new set of resonances. 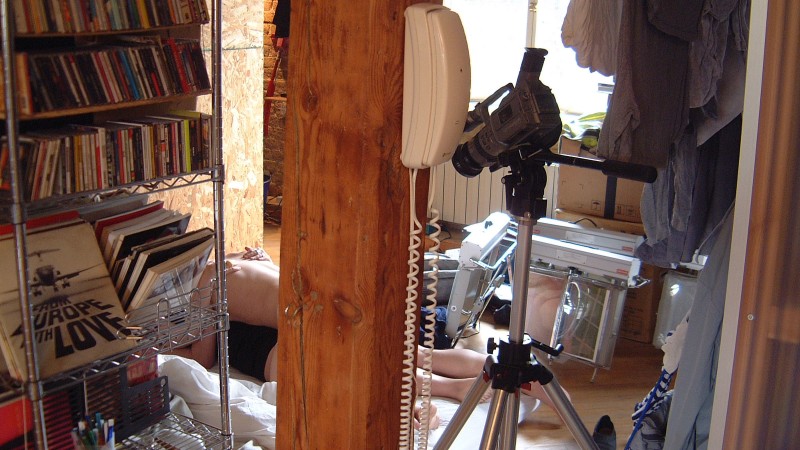 Filmed continuously over 24 hours using a time lapse technique Viewfinder juxtaposes the everyday with the pornographic. Referencing web cams and reality television, the piece poses questions about mediation, self reflexivity and the voyeuristic impulse. Viewfinder premiered at the LISTE01 Young Art Fair, in Basel, Switzerland where Blast Theory were invited as special guests. Thanks… END_OF_DOCUMENT_TOKEN_TO_BE_REPLACED

By partially erasing the ephemeral passage of traffic and people, the video presents the urban fabric as monolithic, expansive and subject to minute shifts that might otherwise pass unmarked. While superficially absent people are in fact constantly present on the margins: a running man appears as blur, another is briefly reflected in a marble column…. END_OF_DOCUMENT_TOKEN_TO_BE_REPLACED 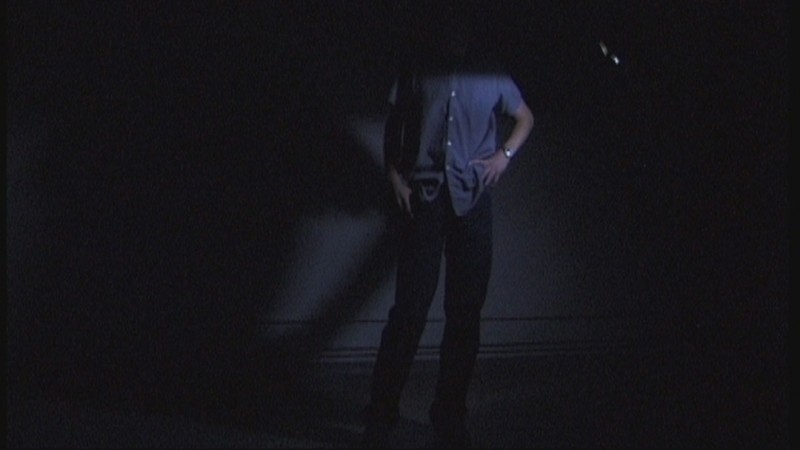 Rock music roars in. And out. Then a real flash, hugely bright in the tiny room from behind the visitor, casting their shadow onto the wall, leaving a vivid after image on the retina. The woman murmurs, another man alone in the room onscreen, another real flash. And so it unfolds. A work about the… END_OF_DOCUMENT_TOKEN_TO_BE_REPLACED 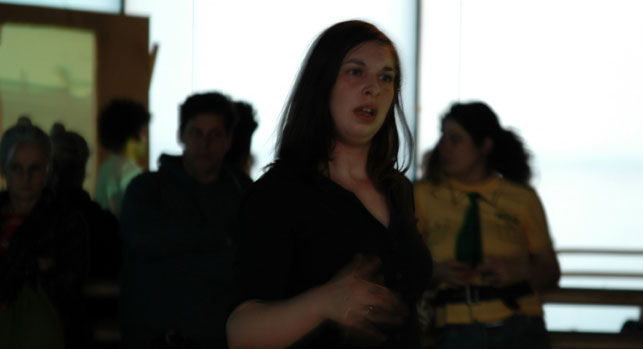 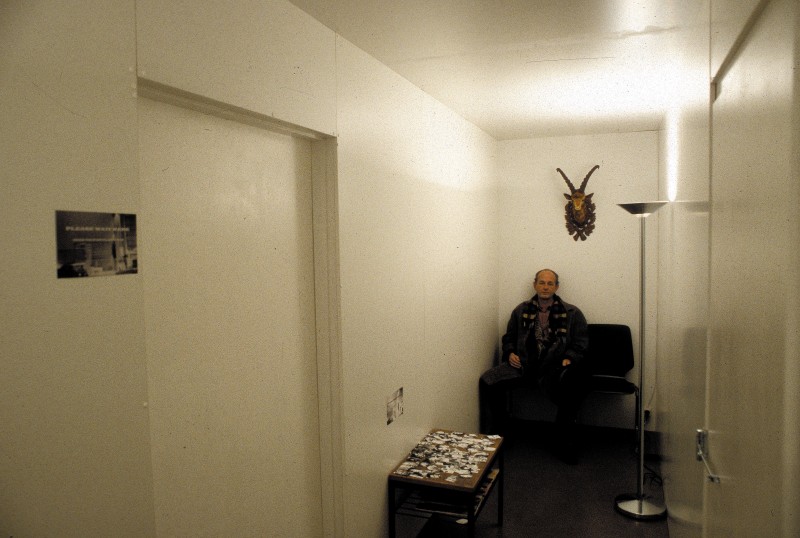 The installation comprises a series of rooms, leading to an interview. On arrival, a receptionist sits at a desk at the mouth of a corridor. Visitors are invited to fill in a waiver giving their name and personal details including their consent to be video recorded. At the end of the corridor is a door… END_OF_DOCUMENT_TOKEN_TO_BE_REPLACED 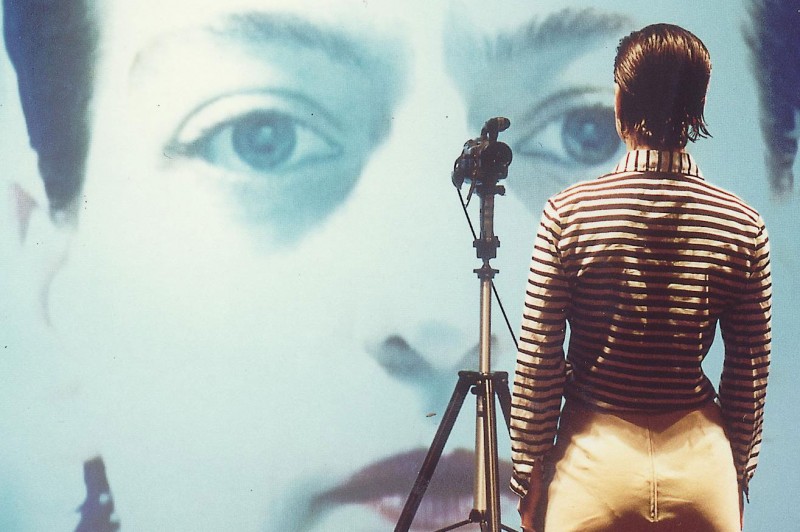 10 Backwards draws on a long tradition of scifi to tell the story of Niki as she learns to travel in time and then arrives back in the present with a deteriorating illness of deja vu and spatial displacement. The show mixed live and recorded video – much of it shot in a startling fog… END_OF_DOCUMENT_TOKEN_TO_BE_REPLACED 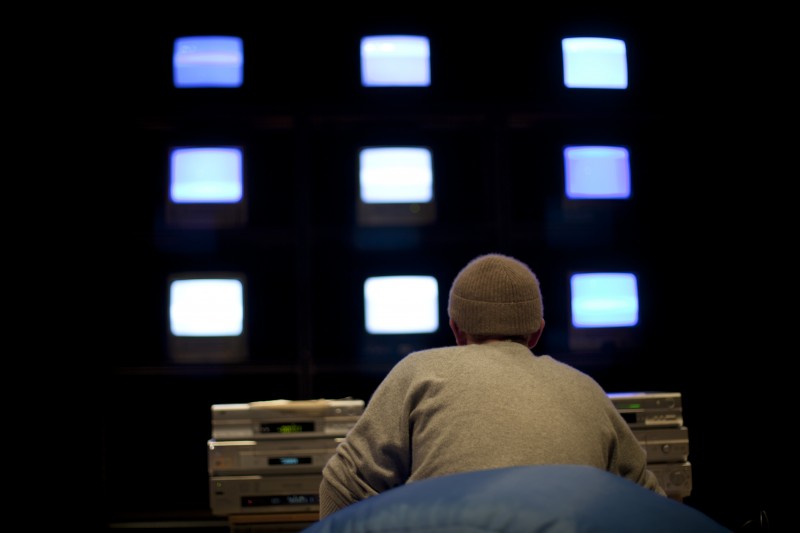 A disrespectful response to the Blast Theory archive. Take your pick from scores of VHS tapes scattered on the rug. Load them into nine players and get mixing. Our VHS archive contains over 200 tapes, featuring footage from 1994 to 2003. These tapes were digitised to computer and the resulting footage chopped up, edited and… END_OF_DOCUMENT_TOKEN_TO_BE_REPLACED 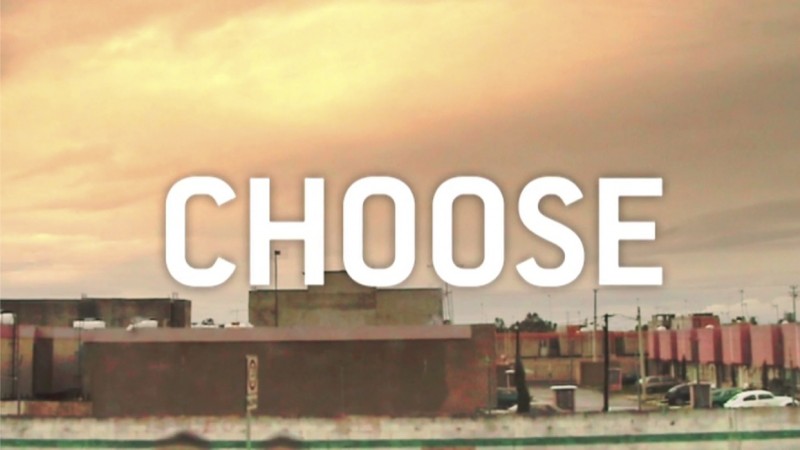 In its playful engagement with the languages of sales, persuasion and exhortation Car Advert has much in common with the Kidnap Blipvert made in 1998. 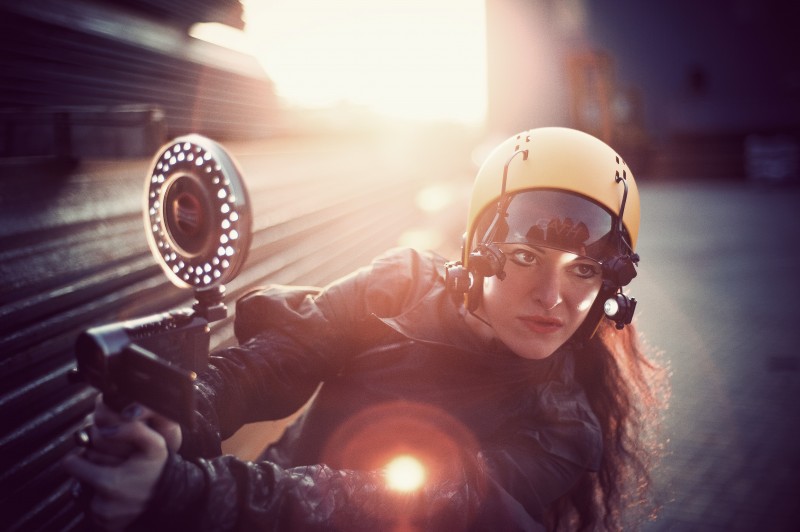 I’d Hide You originates from a research project into Outside Broadcasting funded by the Technology Strategy Board. We worked with London TV company Somethin’ Else and the University of Nottingham to develop a low cost interactive platform for Outside Broadcasting. At the end of the twelve months we wanted to create a simple game that… END_OF_DOCUMENT_TOKEN_TO_BE_REPLACED