Like every charity we rely on volunteers. Countless people help us out for nothing. But this year we set out to offer paid internships too: to make sure that the opportunities we can offer also go to people who cannot afford to give their time for free.

With the support of amazingly generous donors we had Teddy Freeman and Violeta Marchenkova come to work with us. Teddy worked with us in helping to create Bloodyminded, Europe’s first ever interactive feature film shot in one take and streamed live online and to cinemas across Europe, reaching an audience of over 126,000 people.

At uni I had studied Film with the hope of one day being a cinematographer, but working in the film industry is something which is notoriously difficult to do. It’s said that working in film is all about who you know, and I didn’t know anyone.

I interned with Blast Theory at their studios in Brighton from September to October in 2018. When I applied for the internship I had just moved back home from Falmouth University in Cornwall. I was looking for jobs and internships on the arts council website when I saw an ad from Blast Theory for an intern.

This was not the first time I had accidentally stumbled upon Blast Theory. I first came across the collective when I was sixteen and studying fine art at college. I was searching the internet for inspiration, looking for art that was less traditional and more subversive, when I was drawn to the work of Blast Theory. 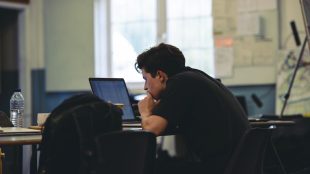 They were making art that was stimulating for the spectator, visually compelling and thought-provoking, and as a result, aids in larger conversations. Finding Blast Theory’s work allowed me to begin to develop my own ways of working and cast aside the idea that creating art is a narrow, linear practice.

The opportunity to work on one of the collective’s projects and get first-hand experience of how their operation works was extremely exciting. I was also the first intern of Blast Theory to be paid for my work. This funded my commute from Surrey to Brighton every day and allowed me to focus solely on my work with the collective without trying to fit in a part-time job on the side.

Throughout my internship at Blast Theory my focus was on the Bloodyminded film project. This was an interactive feature film which was to be broadcast live to cinemas across Europe and accessible online to worldwide audience. I began working on the project just a few weeks before the live shoot. Before I started I had read the script but in hindsight, I had no idea what I was getting myself into. 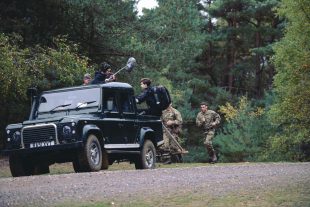 I began working on the film in the studio; researching pieces of equipment, props and costumes. This was all aided by Sarah, the Production and Volunteer Coordinator and 1st AD of Bloodyminded, who showed me how best to organise this information and feed it back to the relevant team. I also spent time working with the comms team, making final adjustments to the edit of the trailer.

Unlike most live broadcasts, Bloodyminded was shot using an extremely ambitious single camera set-up. The camera and crew followed a route of approximately 4km in an hour and a half continuous long shot, taken with a Sony FS7.

On set I was 2nd Assistant Camera, which meant that I was a part of the small team that travelled the entirety of the route. I did not expect to be entrusted with such a large role within the crew, but I was extremely grateful for opportunity to rise to the challenge.

I felt supported by Blast Theory and the other members of the camera department, which made it the perfect time to have my first experience within a professional camera crew. The team were so talented and I learnt a lot getting to work alongside them on the production.

Interning at Blast Theory was an immensely rewarding experience, and one I will always remember. Through the internship I was able to meet a lot of people who share similar interests to me and make contacts within the film industry.

I would recommend this internship for anybody who wants to gain a fresh perspective, be tossed out of their comfort zone and be pushed to achieve more than they thought they could. I’m considering applying again next year using a fake name and wearing a disguise.

Spit Spreads Death: The Parade
A Cluster Of 17 Cases: Installation
Bloodyminded
Gift
My Point Forward
2097: We Made Ourselves Over
Operation Black Antler
Branch
My One Demand
Karen
Too Much Information
Act Otherwise – The Invisible Hand: On Profiling and Personalisation
Blast Theory
Dial Ulrike And Eamon Compliant
The Thing I’ll Be Doing For The Rest Of My Life
Act Otherwise – Art and Ethics
Hurricane
Stampede
Blipvert
Kidnap
Can You See Me Now?
Uncle Roy All Around You
I Like Frank
Day Of The Figurines
Rider Spoke
Prof Tanda’s Guess-A-Ware
Gunmen Kill Three
Desert Rain
Ivy4Evr
A Machine To See With
Riders Have Spoken
Fixing Point
Blast Theory Bless Practice
Ulrike And Eamon Compliant
I’d Hide You