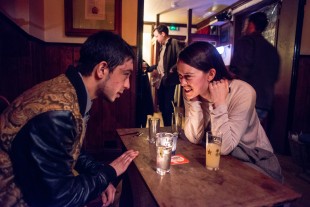 With our collaborators Hydrocracker, we have just launched Operation Black Antler – an immersive theatre work in which members of the public are invited to go undercover at a protest meeting on the fringes of British society. Like many of the projects we’ve made, it is a risky work that puts the audience in a situation they would not normally be in.

The experience begins with a text message telling audiences where and when to meet. Then, in a small groups, they work to develop their undercover identity, learning about their targets and their motivations before going operational. Part role play game, part interactive theatre, at its heart Operation Black Antler is an invitation to explore the moral and ethical dilemma of how far undercover surveillance is acceptable in the name of state security.

You decide on your cover story and how far you want to take it. Audiences have told us that they feel empowered by this – it’s fascinating to me that people are so hungry to understand where ‘the other side’ is coming from. I believe to really enter into a debate about the ethics of state sanctioned surveillance and how far it should go to protect its citizens, we need to step into different shoes.

Operation Black Antler gives participants an opportunity to meet, build empathy with and ultimately try to win the trust of someone whose political and moral views may be the polar opposite of our own. We’re acutely aware of the heightened atmosphere of political turmoil and anxiety around us – making the context of the piece all the more real and raw.

And that’s very much affected the way we’ve treated the script and the characterisation. Whilst it’s impossible to predict exactly where Britain will be come opening night at Southbank Centre, one thing is certain: that it’s unlikely to be a settled political picture and we’ll be constantly adapting the script in response to that.

It may be a work of fiction but our experience is that works of this kind have a powerful effect on those who take part. It is not a world of easy certainties. It is challenging and it is not for everyone. I hope that you will come to the Southbank Centre and let us know what you think.

You can learn more about the themes explored in Operation Black Antler in Undercover with Rob Evans and Paul Lewis, Liberty Human Rights: No Snooper’s Charter, Police Spies Out Of Lives.

Share This
Tagged with
Comments (0)
What do you think?
- Hide Comments

Spit Spreads Death: The Parade
A Cluster Of 17 Cases
Bloodyminded
Gift
My Point Forward
2097: We Made Ourselves Over
Operation Black Antler
Branch
My One Demand
Karen
Too Much Information
Act Otherwise – The Invisible Hand: On Profiling and Personalisation
Blast Theory
Dial Ulrike And Eamon Compliant
The Thing I’ll Be Doing For The Rest Of My Life
Act Otherwise – Art and Ethics
Hurricane
Stampede
Kidnap
Can You See Me Now?
Uncle Roy All Around You
I Like Frank
Day Of The Figurines
Rider Spoke
Prof Tanda’s Guess-A-Ware
Desert Rain
Ivy4Evr
A Machine To See With
Riders Have Spoken
Fixing Point
Blast Theory Bless Practice
Ulrike And Eamon Compliant
I’d Hide You

Why we are making Operation Black Antler

Twitter
Facebook
Instagram
Vimeo
YouTube
Flickr
Cancel
https://www.blasttheory.co.uk/wp-content/uploads/2019/01/Operation-Black-Antler-Safehouse-1024x576.jpg
With our collaborators Hydrocracker, we have just launched Operation Black Antler – an immersive theatre work in which members of the public are invited to go undercover at a protest meeting on the fringes of British society.
Going undercover: what is Operation Black Antler?