Lisa Watts is an artist based in Sheffield.

(she) continues to explore issues of perception and reality, as well as, aspects of individual physicality under pressure

As ironic and wryly amusing as this is, Watts stages and performs her pieces with a sensitive and professional control that imbues them with depth. Uncertainties of emotional and bodily self-image are worked to form rituals of self-confidence

She showed her first performance work, the acclaimed Breadmaking, (1990) at the National Review of Live Art, Glasgow. She then went on to show performance work such as I Never Made It as a Sex Kitten (1993) at Serpentine Gallery, London, Bluecoat Gallery, Liverpool, The Root Festival, Hull Timed Based Arts, Hull, Tramway, Glasgow, Prema Arts Centre, Gloucestershire, The Greenroom, Manchester. As well as Grassmonsters (1990) in Dublin, Ireland, Hamburg, Germany. Her film Bun (1997), made collaboratively with Sussanah Gent, has been a great success and been shown globally including Eat My Shorts film festival, Canada, Bombay, India, Mexico, and it has been broadcast in Spain, Italy and France. Channel 4 made a short documentary about her digital photographic work, titled Muscles, (1998), that was made collaboratively with artist Clare Charnley. Her Arts Council of England funded touring exhibition titled More Funny Feelings, (2001), which was two performances and a video installation was toured throughout the UK. She was awarded a Shooting Live Artists award, which was financially supported by the Arts Council of England, the BBC and Saatchi and Saatchi’s advertising agency to make Escape Mechanism (2001) which is a collaboration with artist Brian McClave. They made a stereoscopic video of an old Houdini act. In 2004, she was commissioned by National Review of Live Art to make a new work, Oh, au naturel (2004) which was performed in Glasgow, and Sofia, Bulgaria. Also in 2004 she was appointed to a residency by Hull Time Based Arts at Interspace, Sofia, Bulgaria where she began the creation of a new work Bad Luck (2006) which was made in collaboration with Alice Maude-Roxby which resulted in an installation along with sound by Ron Wright. In 2004 she also made and toured a new performance Abandoned (2004) around Britain and France, and Austria. For many years she has taught as an Associate Lecturer at various Universities, but mainly at Sheffield Hallam University. In addition, she has worked in various artist in resident settings such as the Civil Service and the NHS. In 2008 she presented a triptych of two performances and one video, sculpture installation at Site Gallery, Sheffield. In May 2010 she was in residence at the Site Gallery, Sheffield whereby she produced a sculptural installation with live action. In 2011 she graduated with a PhD. In 2013/14 she will tour her work, Skittish, to Spacex gallery, Exeter, Vane Gallery, Newcastle, and The Tetley Leeds and publish her book titled, 32 Significant Moments: an artist’s practice as research in the processes of art making funded by the Arts Council of England. Watts, Lisa (editor & author), a monograph titled, 429 Significant Moments: an artists practice as research (2017) is sold at Tate Modern, Whitechapel Gallery, Unbound and Site Gallery. Solo exhibition, Not a decorator… at SIA Gallery (2017), Sheffield and Castlefield Gallery, Manchester (2017) and John Hansard Gallery, Southampton (2018). 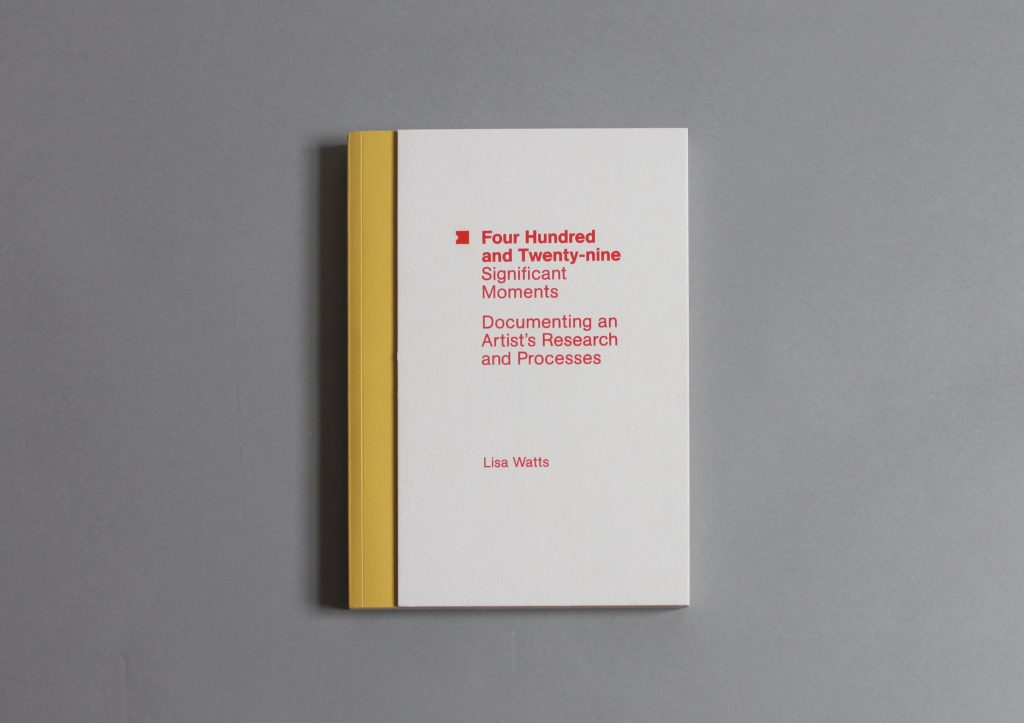 This book, 429 Significant Moments: Documenting an Artist’s Research and Processes (Watts 2018) maps the artistic processes over a nine month period of the making of the art work Not a Decorator…(Watts 2017).  It does this through the artist’s use of Studio Activity Sheets SASs (Watts 2010) and two essays by writers Emma Cocker and Sarah Gorman who watched the art develop.  It is also introduced with a transcription of a conversation between Lisa Watts and Rebecca Fortnum.

This book is unique in revealing a close-up, chronological view of the formation of a specific art work from the perspective of the artist.

The research in this book encourages other disciplines, both within the arts and outside, to understand the aspects of an artist’s practice, as it unwraps artistic processes and their documentation for trans-interdisciplinary research.

Hard back. An edition of 100 printed books. pp 216. £20 plus postage for individuals. £50 plus postage for organisation. Please email lisa.karen.watts (@) gmail. It is currently sold at Tate Modern, Whitechapel Gallery, London.