[…] fantasy is not equated with what is not real, but rather with what is not yet real.” Taking Judith Butler’s essay ‘The Force of Fantasy: Feminism, Mapplethorpe, and Discursive Excess’ as a starting point, this exhibition proposes that fantasy is a powerful tool to not only imagine alternative futures but to manifest them by looking beyond convention.

2097: We Made Ourselves Over is featured alongside work by artists Cedar Lewisohn, Gil Mualem-Doron, Mitchell Moreno, Noraa James, Phoebe Boswell, Sam Moreno Alamein and Blast Theory. 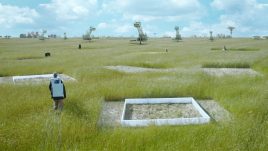