Following acclaimed runs at Brighton Festival and Ideas Test in Kent, we are taking Operation Black Antler to Manchester as part of HOME’s theatre programme on the 7th – 17th June 2017.

“This kind of imaginative conspiracy shakes one up a bit, makes one look at the world differently”

Made in collaboration with critically acclaimed immersive theatre company Hydrocracker, Operation Black Antler is an immersive theatre piece that invites you to go undercover for one night to explore the murky world of surveillance and question the morality of state-sanctioned spying.

For 40 years British police officers have worked undercover inside politically “contentious” groups. Revelations from Wikileaks, the Snowden affair and investigations into the Special Demonstration Squad have raised serious questions about how much respect for the law our secret forces really have.

In Operation Black Antler you will be given a new identity as part of a small team; you are briefed and then sent into an undercover operation. Once inside, you can choose to take part in a series of challenges that encourage you to consider what is and isn’t acceptable in the name of security. You must make your own decisions and then reflect on their consequences.

What will you do when the power is in your hands?

Co-commissioned by Ideas Test and Brighton Festival, Operation Black Antler has been developed with support from Arts Council England, The Chalk Cliff Trust and in partnership with Dramatic Resources. 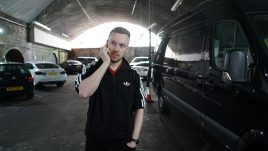