The game unfolds over a total of 24 days, each day representing an hour in the life of the town as it shifts from the mundane to the cataclysmic: the local vicar opens a summer fete, Scandinavian death metallists play a gig at the Locarno that goes horribly wrong while an Arabic speaking army appears on the High Street. How players respond to these events and to each other creates and sustains a community during the course of a single day in the town. 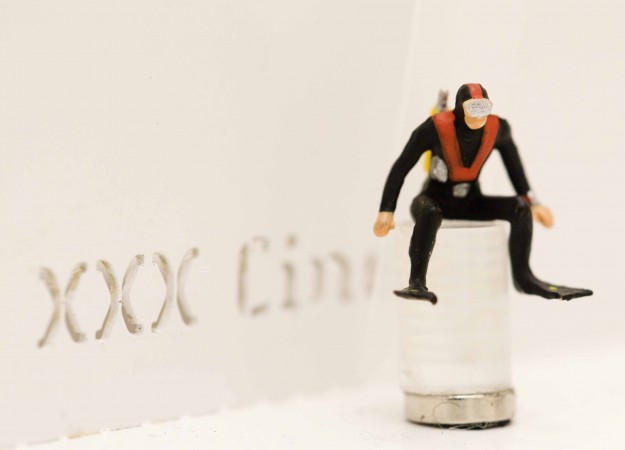 The goal of the game is to ‘help other people’ but it is not necessarily clear how to do this. From the Gasometer to Product Barn, the Canal to the Rat Research Institute, up to 1,000 players roam the streets, defining themselves through their interactions.

Day Of The Figurines continues Blast Theory’s enquiry into the nature of public participation within artworks and within electronic spaces (here, through SMS). It uses emergent behaviour and social dynamics as a means of structuring a live event. It invites players to establish their own codes of behaviour and morality within a parallel world. It plays on the tension between the intimacy and anonymity of text messages.

Playing Day Of The Figurines

The centrepiece of the game is a vast model town – installed in a public space – created using silhouettes of buildings, cut and folded from the metal table top. Each of the 1,000 players is represented by a small plastic figurine which is moved by hand every hour for the duration of the game.

To begin the game, players are invited to create their own figurine: to name it, answer questions about its past and how it is represented to other players. You then see him or her placed in the town. Thereafter participation in the game is via mobile phone. You receive a minimum of one text a day updating you on the progress of your figurine and are invited to make increasingly challenging decisions over their fate and that of other players in response to deteriorating circumstances. You can join or leave the game at any time. One of the key aspects of this game is that it is situated within your daily life: it can be accessed at any time and it can be played in short bursts.

You can chat with other players when you are at the same building. You discover a small set of objects (such as leather wristbands, cups of tea) which can restore your health or be used for set tasks. For example, you may be asked to liberating the animals from the Rat Research Institute. Players’ health deteriorates through interactions with the environment, and you must complete missions to restore it.

Over the course of the 24 days of the game, you must also work out why you are in the game and decide for yourself what helping others might mean. This is especially complicated once a small force of Arabic-speaking soldiers arrives in the town and things start getting violent. To be alive as dawn rises over the town is in some sense to have “won,” but there are no celebrations or rewards for this and – given the long duration of the game – players need to have found some other reason for being there long before this if they are to have engaged fully. In denying what might seem a precondition of any successful game – a clear understanding of what players have to do – Day of the Figurines invites players to think about and discuss their reason for being there.

Although players aren’t required to return to the board after setting off their figurine, curiosity might lead you to revisit the space to observe the changing topography of the town. Regular visitors to the venue are able to eavesdrop on player activity via video displays. A website during the game gives information about the town and allows players to read a history of their day so far. It also gives news of events that are currently happening and hints at events that are to come.

As participation is central to our projects, great emphasis is placed on the audience and their experience. As our work has become more complex this process of assessing what is happening and why is of increased importance.

In June 2005, a 24 day public test was hosted at Laban and the group’s studio. This involved testing interfaces, trialling varied types of content, exploring narrative, critiquing the semiotics within the work (“What metaphors are operating and in what way? Should we be aiming for clarity or ambiguity?”) and tracking the routes through the work in chronological order. Ethnographers from the Mixed Reality Lab worked on the evaluation of this process.

The work held its world premiere at the First Play Berlin Festival at the Hebbel am Ufer theatre, HAU2, in October 2006 following a three day play test as part of the Sonar Festival in Barcelona in June 2006.

Day Of The Figurines has been developed in collaboration with the Mixed Reality Lab at University of Nottingham, Sony Net Services and the Fraunhofer Institute as part of the European research project IPerG (Integrated Project on Pervasive Gaming).

Blast Theory and Mixed Reality Lab in conversation
Show All 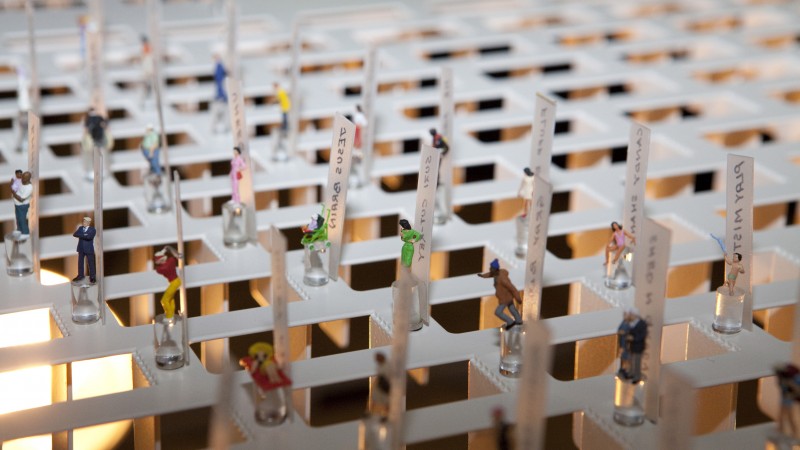